I've been keeping my eyes peeled for a new tank for a while now and last week, my wife found a used 240lt Jewel for a really good price. We just went for it and the next morning we spent the best part of the day, getting the old one cleaned out and filling the new one. The fish were obviously not impressed staying in buckets for a while but it would all be worth it in the end...
We took our time thinking out the layout ahead and had collected some suitable rocks as well as some black sand. We were going to use some of the old gravel for half the bottom of the tank and the black sand for the other half.
While taking the stones and gravel out of the old tank, we were amazed at the amount of 'life' we found. We had a few anemones in the old tank but hadn't seen them for months, I thought they didn't survive but we found them (much larger now) under one of the big rocks!
Moreover, the gravel was absolutely teeming with minute creepy-crawlies and I tried to get as much of it as possible in the new tank...

Goes to show what a stable ecosystem the tank had become.
We arranged the rocks overlapping each other, roughly in a pyramid shape, with plenty of nooks and crannies for the fish to hide, yet facing outwards so that you could still see part of the fish.
Also, I introduced a floating Ivy-looking plastic plant that offers great cover for the prawns and even the crab moved there now. 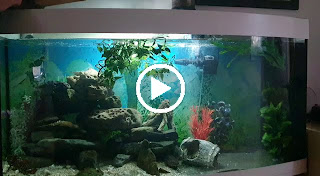 The new tank is practically double the size of the old one with fish having much more space now, even though it's still taken them a few days to sort out who goes where and settle down.
The wrasse and blenny seem the most settled, followed by the scorpions, lemon sole and goby. The rockling has gone back to being a bit shy and mostly comes at night to feed again.
I'm really enjoying the bigger tank but I have to say that I cant wait to add a new fish or two..! Something like a mid-level swimmer... Might even try and get a couple tiny coalfish again. They didn't establish in the old tank but I think they might in this one.

Hopefully, this tank will be just as successful as the old one and my fish definitely seem to like it more. Those prawns especially, as now they have somewhere to hide from the predators that lurk beneath...!