Last weekend I guided a keen angler from my old hunting grounds in Lancaster. Tim wanted to taste what Skye has to offer and came up prepared with 2 brand new rods and reel specifically bought for this trip.

We met up on Saturday morning and were gonna fish that day off the sib and Sunday on the rocks. We set off to the first mark and conditions were looking good. He got his new Savage Gear Sgs8 rod paired with the lovely Shimano Vanford and to be honest I was slightly jealous of the setup... we had a few casts before he got snagged to some kelp. Unfortunately after applying some pressure, the rod snapped just above the spigot!! I didn't think that he exerted so much pressure as I proceeded to free up the lure with a slight tug...! Nevertheless, he switched to his heavier rod (SGS5 I think) and got straight into fish!

They're getting more predictable lately and we found them where I'd expect them to be. I suppose nearing Autumn things will get back to normal after this calm Summer.

We proceeded in finding some good fish mainly on softplastics, with the homemade Crazy Sandeel imitations from my Northumbrian friends doing plenty of damage. At some point we had another breakage, as my net hoop finally succumbed after netting hundreds of fish the past few years! A day of cracks for sure... 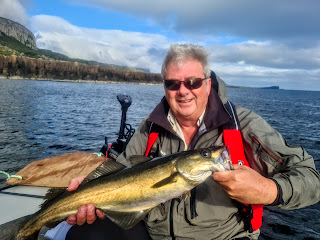 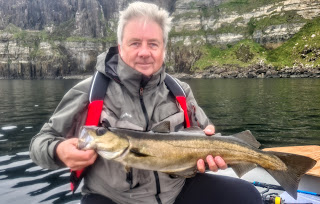 The next day it was time for shore fishing and I picked up Tim on my way to Neist Point.  The tide wouldn't be at my preferred stage for a few more hours but it's best to fish early in the busier marks anyway.

The current was strong and we used heavy softplastics first and 40-60g metals later on. There were plenty of fish about although not of any great size. Tim got his pb ballan wrasse though on a paddletail. 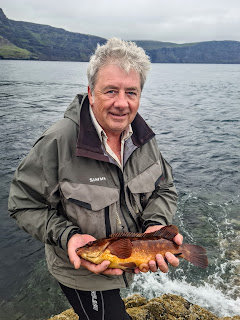 It was time to move to my next spot where I was counting on the better fish but Tim had enough of the hiking and was happy to wrap the day up. Skye hikes can be tough!

It was a pleasure to fish with Tim and he's informed me that the perch in the Lankie are doing well!

I've got no guiding booked till September now so I'll do some solo sessions hopefully for sea trout and mackerel.