Had some fantastic sessions lately and the settled weather along with the aggressive fish, made for some very exciting fishing!
Firstly, I had a good day out on the SIB with my friend Milos. It was his first time fishing in Scotland and I made sure he caught his first Scottish fish! Whats more, he caught it on a topwater lure that's made by a friend, within the first few casts! We had loads more pollock throughout the morning, mostly on sps and metals. Also, we picked up some mackerel and a wee wrasse on a Breaden metalmaru with the LRF gear. 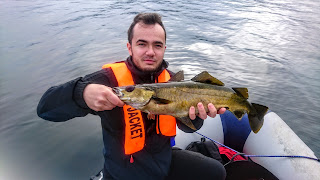 Then on Sunday, I had the pleasure to fish again with the mad Geordie crew! The lads were up for the third time in a row and this time they brought two Skye virgins...
I've fished with the lads in most good marks of the Island and this time I wanted to offer them something different... I've been thinking for a while to try and get my friends on the islands I tend to visit with the sib, but instead of fishing from the boat, just beach and fish from the rocks.
This we did and soon enough we started catching. The fish preferred metals early in the morning and Keith managed a few OTT with a patchinko and my friend Soulis Autowalker 115s.
Unfortunately, the head of my prized Solpara landing net fell off (worn threads) while trying to net the first fish and for the remainder of the day we fished without it, resulting in some losses. Nevertheless, everyone caught some very good kelp pollock with their dark colours and the action got intense soon after HW.
Later on in the day, the soft plastics started giving most fish, with the Fiiish Crazy Sandeel proving irresistible to the big ones! Mick realised this last year and now he was armed with a whole box full of them! He got some very good fish but also got reefed by a few donkeys! 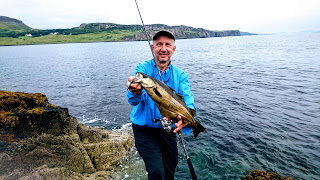 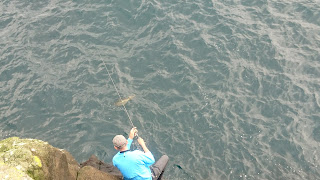 It was an awesome day and we returned to the harbour knackered! The island doesn't have sheep on it and the vegetation grows wild, making hiking quite tiresome. We did get rewarded with excellent fishing though along with seeing a big sea-eagle, so no complaints there.
I have already ordered a replacement net and can't wait to get out there again!