August fishing between the gales!

Somehow its already the end of August and typically for Skye, this month brings unsettled weather.
I haven't had many solo sessions but I did two days guiding with my friend Rob from Yorkshire.
The forecast gave 20-30mph Southerly winds and we had planned one day on the SIB and one from the rocks.
I decided on hitting a Northern mark with the Sib, as it offered the most shelter. We would be fishing from Rob's Honwave T32 inflatable and after a couple pump issues, we got it all inflated and launched.
The fishing was done very close to shore and over a steep kelpy shelf.
We used mainly 12-14cm shads and soft jerkbaits on 20g jigheads.
From the off the fish showed an aggressive presence and they were all of a surprisingly good size... Most of them were well over 2kg and we had a couple that must have went to 4kg plus! The fights were spectacular and it was very difficult to stop these fish reaching the bottom. Most were coaxed out slowly and with some patience, a few broke us off and one was taken by a seal that gave the reel a proper workout!
We didn't stay long out as the wind and rain intensified but this was one of the most successful SIB sessions of the Summer!
On the way to the harbour, the waves made going a bit wet but we were soon on the slipway and glad to be getting out of the rain. 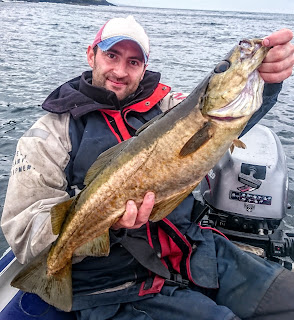 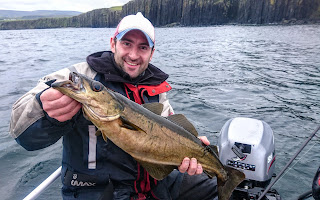 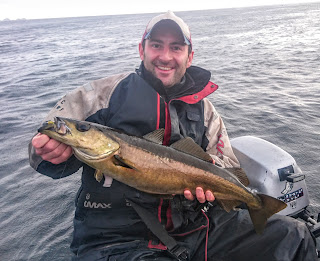 The next morning the weather got even worse and we met at a shallow bay, where again, we would be most sheltered from the wind. There was some swell running that made fish a bit fussy but we managed some nice dark pollock on the softplastics but also on the fly! Rob is a keen fly angler and even though he thought that conditions were prohibitive, I insisted on him bringing the fly rod along in this mark.
It's always amazing fishing so close in for pollock and being able to see them take the fly! 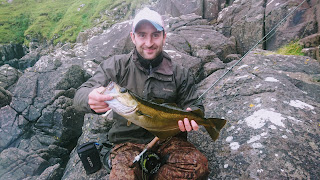 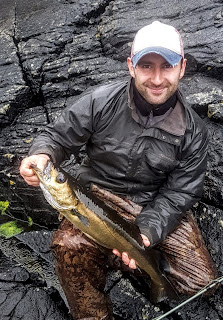 Unfortunately, the bad weather conditions really slowed down the fish on the next spot we hit and we decided to call it a day.
It was a pleasure fishing with such a passionate angler like Rob and seeing those bites on the fly was just mesmerising!
Yesterday, I had a SIB session with my friend Adam, this was his first time ever going fishing (!) and I was determined to get him on the fish! We fished Staffin bay mostly as again the weather wasn't good. Northerly winds and lots of rain had given a tannic tinge to the water, that made fish finicky.
Still, we persisted and after Adam got used to how the reel etc worked, started getting some tentative bites. He hooked up and lost a couple fish along with one break off but in the end he managed to get some nice fish!


Even though the wind and swell meant that most fish kept low, the tide was right for trying topwaters. I put on the Mechanic Lures Autowalker 115s and had a few casts in a good looking spot. I'm always amazed at how hard pollock can slam topwaters and not get hooked! See the clip below..


I'm now looking forward to the Autumn months, as this means that Ill get more free time and hopefully some settled weather! Also, its time for the serious fishing to begin!