Fishing and guiding amidst the washout!

Well, its October now and we've yet to see an end to the near constant wind and rain!
Ive only done limited fishing comparing to the same time of year the previous seasons, but the fish seem so up for it that its almost like they're asking for a bit of calm weather to go on a rampage!
I'm saying this after having a guiding session off the rocks and sib today and we literally had fish from the first cast! Moreover, even though the waters were slightly cloudy, with a swell running and brisk SE winds, we witnessed fish hitting topwaters... I love this time of year because of the fish feeding so hard but damn, I could do with some settled conditions!
Anyway, today I had a revisit from Andrew who had come back in summer for some rockfishing, only now he brought his mate Nick and wanted to fish off the Sib but also a couple rocky points if possible. The lads were mostly focused on numbers today although Andrew wanted to catch on the fly and also requested as many coalies as possible! Its so cool to find like-minded anglers!
I was worried about the forecast all week but thankfully it stabilised and I managed to plan a session in the North of the island.
We set off at dawn and after a short run on the SIB, we reached the mark.
We were fishing near the edge of a kelp covered ledge over 8-12m of water. Armed with 12-14cm shads on 30g jigheads, the lads started casting near the kelp and straight away were into good fish.
There was a touch of chaos in the boat for a few moments but in the end we got both fish landed and it was time for the usual pics. 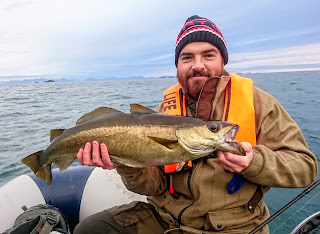 Many more followed and most were over 2kg with the biggest going 3.6kg on the scales. The pollock were in excellent condition, fat and rounded though the few coalies we found seemed on the slim side.
The sps were more consistent with the big fish as expected though some crackers were caught on tiny metals as well. It was very interesting watching the sounder when small shoals of coalies would appear, we'd get a couple and then pollock would crash the party and the coalies would move on...
After catching a good few fish and even though the conditions were far from ideal, I put on a topwater just hoping we'd get one or two to jump on it. Well it actually managed to raise 5-6 fish with a small one jumping on the lure as i was about to pull it out of the water! No hook ups unfortynatelly. 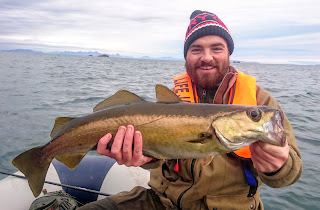 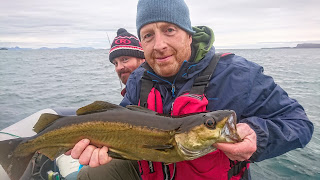 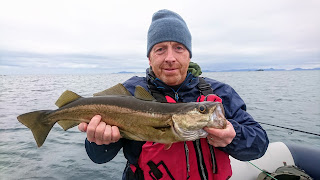 After a while, Nick wanted to stretch his legs a bit and we beached on a rocky outcrop so that he could have a few casts there, while me and Andrew would stay in the boat and try to locate some coalies and catch them on the fly.
It turned out that coalies were very patchy on the day but instead Andrew managed a wee pollock on the fly. His setup was a very light one and with all that wind, he could only get the fly a limited distance. I'm sure that with a heavier setup, the results would've been much better.
While we were looking for shoals of coalies we passed over deeper water and saw fish near the bottom, wondering what they were, I put on a slim paddletail on a 28g cheburashka and let it touch bottom. Got a couple soft bumps  and then struck into a fish. It turned out to be a wee codling. They were shoaled up but a bit finicky and we didn't manage another one as the pollock were quicker on the bite. I found shoals of codling at about this time of year last year too, so it must be a seasonal movement.

With this and that it was time to head back to the harbour. A very successful day in a thankfully better day than forecasted! It was a pleasure having the guys and hopefully we'll fish again together at some point.
Lately Ive been thinking of purchasing a slightly smaller sib to go with my wee 2stroke outboard for solo missions. Even though my solid floor takes relatively little time to assemble, its too heavy in combination with the 20hp outboard for the 'rougher' launches, plus the 2 stroke is just sitting there gathering dust... Saying that, I was very happy that the lads didn't mind at all fishing in such a cosy space and the Yam performed well with the added load.
The tourist season is very slowly winding down and this gives me more time to get out. I have November off and I'm really looking forward to some chilled out fishing then. Hopefully the weather will calm down by then!
Below some more fishy pics from recent solo outings and a wee topwater fishing clip from last week! 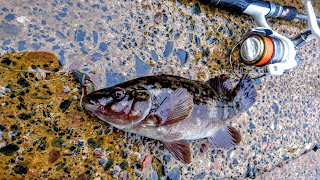