Some exciting fishing on two sibs!

The weather has settled a bit the past couple of weeks and this has allowed me to get out a good few times. I had a fun session fishing around Neist Point from the sib, something I've wanted to do since I got it! It was a fantastic sunny day and I got good numbers of pollock along with a nice wrasse and some coalies. I had found shoals of tiny mackerel and after catching some on feathers, I decided to use them as bait near the bottom.
My target was spurdog but unsurprisingly it was almost impossible to get through the pollock! A large shoal was holding over a rocky reef at around 50m deep and would pick up anything dropping before it hit the bottom! 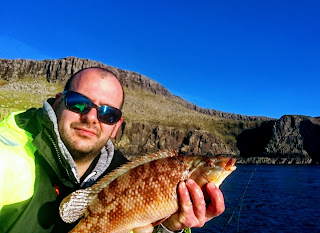 Unfortunately, it was time to head home and I didn't manage to catch a spurdog...
The next day I went out on a new boat I got for solo outings. It's a Honwave T32 air v floor inflatable and I paired it with my old Evinrude 2 stroke outboard. I've been wanting a lighter and
faster-to-assemble combo for when I want to hit multiple spots and from 'rougher' launching areas.
In the day, the combo behaved pretty well and I got 14-15kts although I did have some issues with the boat that im trying to resolve...
The fishing wasn't bad either, with a few good pollock among a 'flood' of chunky coalies. I also got among some codling from a deeper spot. Not a bad couple of hours. 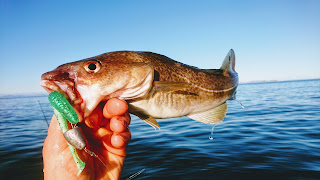 Then yesterday, we were in a small tide week and in combination with the settled conditions I was hoping the fish would be up for it. I targeted the area around Neist again and was going to do some bottom fishing for those spurdogs again, but on the way there, the pollock had other ideas...
I found shoaled pollock and coalies high up in the water column and they would often break the surface as they were feeding!
Time for topwaters! I took out a Mechanic lures Autowalker 115s and after a few casts, I had a couple blow-ups and fish jumping on it. It didn't take long before I connected to one and the fun started!
Got some nice fish and the hook-up ratio was far better than usual. It appeared that the fish were hitting to feed. Top fish was one of about 2.5kg that managed to hook me while thrashing!
After that fish, I decided that it was already a successful day and headed home. I'll get those spurdogs at some point for sure... 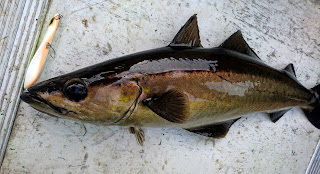 Its been a fantastic couple weeks and I hope that the nice weather continues. I'm looking forward to my time off from work coming soon and intend to get out as much as I can.  Definitely gonna try and bait fish for some different species although it will be hard to get away from surface feeding fish!