Best fishing of the year!

The settled weather has continued and the fishing can only be described as being on fire!
Had a sib session with friends Colin and Fred and I still can't find the words to describe how awesome the fishing was!
It was a cold, overcast, morning last week but there was only a breath of wind and very little swell. We fished shallow (10-18m) kelp ledges and from the get-go, the fish went crazy for our lures. After catching some lunkers on sp's, I told the guys to get some topwaters on... Colin is more acquainted with them as he fishes for bass, but Fred had only recently given them much time.
Colin put on a Patchinko while I gave Fred an Autowalker 115s and showed him how this lure works just by retrieving it steadily. Hits were instant..
Colin hooked up to something big, as did Fred though his fish got off soon after. Colin was still bringing his fish in and Fred was in again! Unreal stuff!
Finally, I saw colour from Colin's fish and upon putting it in the net, we realised that this one was a big mama! She went to 10.5lbs and left us all looking each other in joy and disbelief. I unhooked her and Fred's fish and quickly sent them back into the water. The mayhem continued for almost 2 hours and I lost track of how many fish we got. Topwaters really shined on the day. The fish were hitting them hard and getting them deep with far fewer misses than usual. There seemed to be a significant influx of pale pollock (open ground, shoaling fish) along with the darker ones I tend to find more on this mark. The reason must have been the shoals of baitfish showing on the finder... Everything caught fish, even a big squid lure that was skipping the surface as Fred was bringing it in, when a pollock hit it mere meters from the boat!😆

At some point, Colin offered me to try his favourite rod, a Tailwalk eginn paired with a Shimano Sustain. It was a lovely combo that I could fish with all day... I say was and not is, as unfortunately the setup was lost in the most unreal incident that I've ever experienced whilst fishing...! We were all fishing softplastics for a bit and Colin and Fred were into fish, wanting to help land their fish, I retrieved my line, put the rod down with the tip over the water and the lure just hanging in the water. This proved to be a big mistake... As I was bending over with the net, I caught with the corner of my eye, the rod flying into the water at speed!! Obviously, a pollock took the static lure anc crash-dived taking the rod with it...! I was left speechless after this incident and also very deflated that I lost such a great rod and reel. I tried to retrieve it for an hour or so with a lead and hooks but to no avail. Colin
took it better than me and we decided to not let this stop us from enjoying the day. I've since sorted it out.  We kept fishing and despite the bite slowing down, the fish were still willing to take OTT. Thus we would cast metals and softplastics and after seeing interest, we'd try a topwater. This gave me a lovely pollock on the Autowalker again.
It was soon time to head back after a day that none of us would forget any time soon! 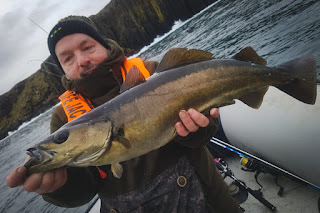 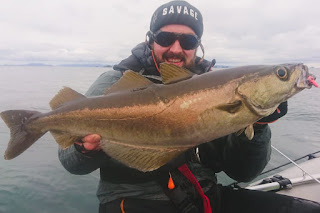 And a wee video

This week, I was guiding again but from the rocks this time. Friends Ryan and Craig came for the first time to Skye and wanted to experience the fishing. Conditions were looking great although the tide wasnt ideal. We started soon after first light but things were slow to develop. The seals were keeping very close and once we started getting some fish, they became a pest by stealing them... We encountered shoaled up 2-3lbs fish and it proved hard to get through them to the bigger ones throughout the day. It kinda felt like spring in a way ie shoals of smaller immature pollock but very few bigger ones.
We did hook a few 4lbers but only managed to land a couple whole...😑
Nevertheless, it was a very pleasant day and it felt good to be on the rocks again. Was getting too lazy fishing off the boat all the time. The boys were happy as long as they were catching fish as even the ones we were catching were of good size compared to where they usually fish. It does bug me on the rare days when the biguns don't show and despite our efforts, it just wasn't happening that day. Goes to show that even in Skye you cant expect lunkers every day.
I did recommend to the lads that they come again after Xmas when the big females are in. Hopefully I'll be able to showcase them the potential of this place then... 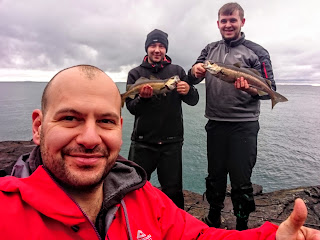 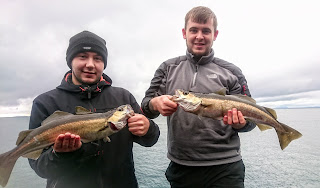 Until next time Tight Lines to all!