On Thursday I had an opening in the weather and decided to open my 2020 account.
In light of the previous sessions surface action, I was keen to try and get a topwater pollock in January, something that I've not managed before.
I picked a lighter setup for the day (Akilas Mobile 80H - Stradic Ci4 2500f) and went out on my Honwave T32 sib.
The area is a favourite of mine near Staffin with depths of 8-16m.
Conditions were looking good with an overcast sky and light wind. The tide was almost all out and in retrospect, I should have set off a bit earlier...
I started straight away with the Mechanic Lures Autowalker 115s in lemon back. It didn't take many casts and I had fish blowing up on it! Unreal stuff for January!
Most of the strikes were so violent that they would propel the lure several meters away without getting hooked! I changed to another auto walker rigged with trebles but lost that lure on a wind-knot after a few casts...
I tried with a pink-back patchinko imitation but it appeared that they wanted the lemon-back autowalker in the end.
I interspersed the topwaters with various softplastics just so I could catch some fish but after anchoring on a new spot Id start with the topwater as this was my goal for the day.
Amazingly, one of the fish on softplastics came up with a long leader sticking out from its mouth and I'm wondering if its a fish that I or my friends have lost in the past couple months!! I tried to check out the lure but it had it all swallowed up. The fish seemed fine though, so I just trimmed the protruding line some, and let it go.
I've only managed to get a few of the topwater strikes on camera than the ones I had throughout the day but even though I fished hard till sundown, I just didn't manage to get fish in the boat! On several occasions I hooked up, only for the fish to shed the hook on the way in... So frustrating but also exhilarating seeing them hit like that in the middle of winter.
I blame the softer rod but also my rusty hands for this and I feel that I've had my last chance on the topwaters... 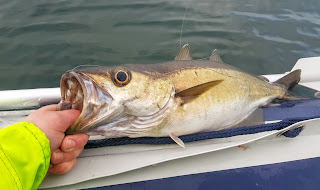 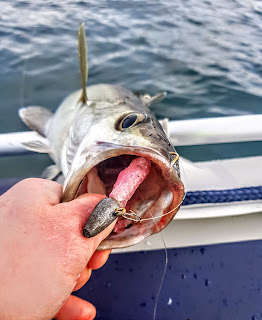 Nevertheless, it was a great first day out and I have high hopes for this year. And what a year its meant to be with the expected arrival of my first baby in a few weeks! I know that this will affect my ability to go out and fish but priorities are priorities!
Heres a video of some fish and blowups of the day.