This is the first year that I have managed to devote some time and effort into going after these beautiful fish in Skye. The change of job and availability of spare time have contributed greatly to this. Previously I'd get them sporadically while rock fishing or lrfing for flatfish, especially in the south of the Island. Thus this year I've refined my gear and approach to suit. I use my MajorCraft Crostage Light Game CRX-784LG travel rod as its light yet can cast and work a variety of lures and weights. Moreover, the rod's moderate action limits hook-pulls and its overall performance has managed to prevent me from buying a specialised rod!
I still use my ever faithful Shimano Stradic 1000fc loaded with 0.6PE Shimano Kairiki braid and 6-8lbs fluorocarbon leader.
The lures I've had better results with were 7g-10g slim spoons and hollow jig minnows.
I mainly target areas that I had caught them before and in various states of the tide. Late afternoons into the evening seem best. Found them more localised in bays around low water, while more spread out and near points around high water.
So far, my hook up to landing ratio is pretty good on this setup and sometimes I can't help but think that these fish could actually have a better chance of escaping if they only kept themselves in the water and just made runs like most normal fish! lol
Unfortunately, most of the fish come laden with sea-lice even though there are no fish farms in that area. 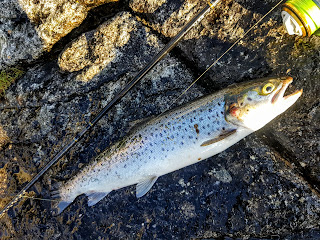 I reckon I'll stick to the trout theme for a bit longer and then hopefully go after some pike and perch in freshwater. Weather's fair so got to make the most of it!